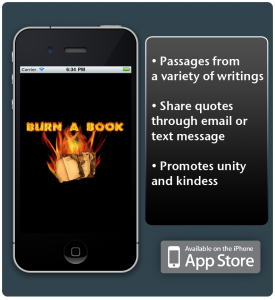 When I started iOS development at age 14, I wanted to make something outlandish, something that hadn’t been done before. Controversy was not my intention when I made it, but I decided to develop an iOS app titled “Burn-A-Book”. Unlike the name implies, the app does not actually let you burn books, but instead displays a passage from the book you intended on burning, such as this passage from the Baha’i Writings:

“Let your heart burn with loving kindness for all who may cross your path.”

Because of the title of the app, the icon, and the description in the app store, the goal was to attract people who want to actually burn the books. It worked for the most part. Many reviews on the app store remarked how they “wanted to burn books, not read them”.

Several online news articles were written as well by Melville House Books, The Stranger, and even The Seattle Pi. Many people didn’t catch the name of my company, “Snarky Apps”. Others took the app at face value, drawing conclusions without even opening it.

This was definitely my first stepping stone to creating public projects for anyone to use, whether that be utilities or games. I received countless emails, some praising the app while others disappointed they couldn’t burn The Origin of Species.

The description of the app on the app store read:

“Have you ever had the urge to burn a book? Well there’s never been a better time to exercise your freedom of expression with a nice and toasty bonfire and a good book! Choose from The Bible, The Koran, the Baha’i Writings and many more!

**Disclaimer** The creator of this app in no way condones the actual burning of books.”